This is the fourth in a series of posts about setting up Play WS as a TLS client for a "secure by default" setup and configuration through text files, along with the research and thinking behind the setup. I recommend The Most Dangerous Code in the World for more background.

The Attack: Man in the Middle

The scenario that requires hostname verification is when an attacker is on your local network, and can subvert DNS or ARP, and somehow redirect traffic through his own machine. When you make the call to https://example.com, the attacker can make the response come back to a local IP address, and then send you a TLS handshake with a certificate chain.

However… if the attacker get a CA to sign a certificate for a site that it does have control of, then the attack works like this: 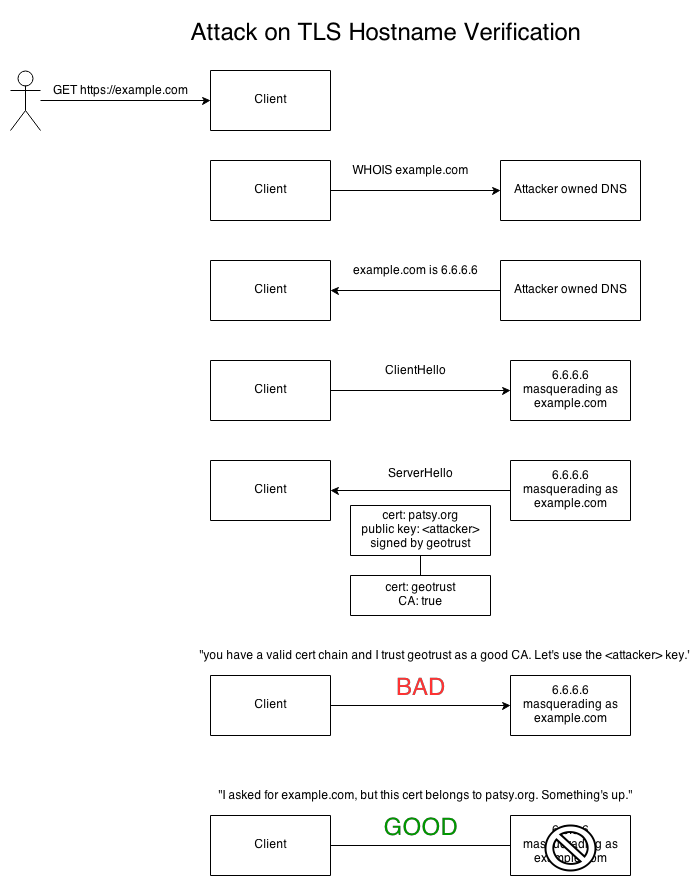 In the example, DNS is compromised, but an attacker could just as well proxy the request to another server and return the result from a different server. The key to any kind of check for server identity is that the check of the hostname must happen on the client end, and must be tied to the original request coming in. It must happen out of band, and cannot rely on any response from the server.

In theory, hostname verification in HTTPS sounds simple enough. You call "https://example.com", save off the "example.com" bit, and then check it against the X.509 certificate from the server. If the names don't match, you terminate the connection.

You generate a certificate with the right name by using keytool with the -ext flag to say the certificate has example.com as the DNS record in the subjectAltName field:

And to view the certificate:

Is it really that simple? Yes. HTTPS is very specific about verifying server identity. You make an HTTPS request, then you check that the certificate that comes back matches the hostname of the request. There's some bits added on about wildcards, but for the most part it's not complicated.

Because TLS in its raw form doesn't do hostname verification, anything that uses raw TLS without doing any server identity check is insecure. This is pretty amazing information in itself, so let's break this down, and repeat it in bold face and all caps:

A) VERIFICATION OF SERVER IDENTITY IS APPLICATION PROTOCOL SPECIFIC.

B) BECAUSE OF (A), TLS LEAVES IT TO THE APPLICATION TO DO THE HOSTNAME VERIFICATION.

Given the previous points and the consequences of failure, this would lead us to believe that there must be a safety system in place to validate the TLS configuration before opening a connection. To my knowledge, no such system exists. This is despite the fact that there are really only three main protocols that use TLS: HTTPS, LDAPS, and IMAPS.

TLS LIBRARIES SHOULD MAKE IT IMPOSSIBLE TO USE THEM RAW WITHOUT ANY HOSTNAME VERIFICATION. THEY DO NOT.

In 2011, RFC 6125 was invented to bridge this gap, but most TLS implementations don't support it. In the absence of a known guide, using RFC 2818 is not unreasonable, and certainly better than nothing.

The JSSE Reference Guide goes out of its way to mention the need for hostname verification.

A little later, the reference guide mentions it again, in context with HttpsURLConnection:

[T]he SSL/TLS protocols do not specify that the credentials received must match those that peer might be expected to send. If the connection were somehow redirected to a rogue peer, but the rogue's credentials presented were acceptable based on the current trust material, the connection would be considered valid. When using raw SSLSockets/SSLEngines you should always check the peer's credentials before sending any data. The SSLSocket and SSLEngine classes do not automatically verify that the hostname in a URL matches the hostname in the peer's credentials. An application could be exploited with URL spoofing if the hostname is not verified.

I've never heard the term "URL spoofing" before, and Google shows nothing remotely connected with this term. Ping me if you've heard of it.

Anyway. JSSE does do hostname verification, if you set it up just right. For completeness, I'm going to go over all the options.

In 1.6, if you want to use hostname verification, you have one way to do it. If you use HttpsUrlConnection, then JSSE will do hostname verification for you by default. Other than that, you're on your own. JSSE 1.6 does not provide any public classes for you to extend; it's all internal.

If you want to use hostname verification on an SSLEngine, you have to get at an instance of sun.security.ssl.SSLEngineImpl and then call sslEngine.trySetHostnameVerification("HTTPS") on SSLEngine directly, using reflection. This lets ClientHandshaker pass in the identifier to com.sun.net.ssl.internal.ssl.X509ExtendedTrustManager.

In 1.7, the manual method of doing it is not as bad as 1.6. There's an explicit call you can make (recommended by Stack Overflow):

But this doesn't actually work with AsyncHttpClient: you'll get a NullPointerException!

The reason why: AsyncHttpClient creates an SSLEngine without the peerHost and peerPort. JSSE assumes that if you called sslParams.setEndpointIdentificationAlgorithm("HTTPS") then you also created the SSL engine like this:

So, setEndpointIdentificationAlgorithm is not an option. (The lack of hostname could also possibly have an effect on Server Name Indication, although I haven't tested that.)

There is another way to do hostname verification though. You can pass in a custom HostnameVerifier to the SSLContext.

HostnameVerifier is an interface that normally says "if you've tried resolving the hostname yourself and got nothing, then try this." However, since AsyncHttpClient works directly with SSLEngine, the Netty provider will call the HostnameVerifier on every call to do hostname verification. This gives us the avenue we need.

I ended up using Kevin Locke's guide to implement a HostnameVerifier that calls to Sun's internal HostnameChecker, the same way that setEndpointIdentificationAlgorithm("HTTPS") does. The end result is pretty simple:

After that, I could set it on the builder and have hostname verification triggered:

And there's an option to use your own hostname verifier if you're not on an Oracle JVM:

AsyncHttpClient 1.8.5 doesn't use a handshake listener. Instead, it uses a completion handler, and potentially hostname verification may fail unexpectedly if you set a custom hostname verifier. It seems to work most of the time in the field due to a race condition – by the time the completion handler is notified, the handshake has completed already. Still working on this.

Oracle's HostnameChecker does not implement RFC 6125 correctly. Even HTTPClient's StrictHostnameValidator seems not to be up to spec, and there are many cases where hostname checkers have failed against NULL or bad CN strings.

Nevertheless, it is the way that HTTPS is supposed to work – if you have a problem with hostname verification, you really need to check your X.509 certificate and make sure that your subjectAltName's dnsName field is set correctly.